Carson Eckhard, majoring in history and English, with minors in urban studies and Africana studies in the College of Arts and Sciences, received a Thouron Award to pursue graduate studies in the United Kingdom 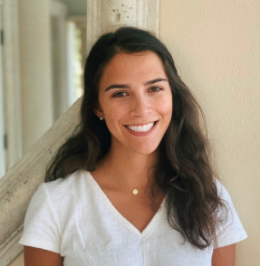 Four University of Pennsylvania seniors and a 2019 graduate have received a Thouron Award to pursue graduate studies in the United Kingdom. Each scholarship winner receives tuition for up to two years, as well as travel and living stipends, to earn a graduate degree there. Because of pandemic restrictions, this year’s scholars can start their degrees in 2021 or in 2022. Established in 1960 and supported with gifts by the late John Thouron and his wife, Esther du Pont Thouron, the Thouron Award is a graduate exchange program between Penn and U.K. universities that aims to improve understanding and relations between the two countries.

Carson Eckhard, from Tampa, Florida, is majoring in history and English, with minors in urban studies and Africana studies in the College of Arts and Sciences. She is a Mellon Mays Undergraduate Fellow and a University Scholar. At Penn Eckhard is chair of the Student Committee on Undergraduate Education and vice president of engagement for Beyond Arrests, a campus criminal justice reform organization. An Andrea Mitchell Research Fellow and member of the Penn & Slavery Project, Eckhard aims to use academic research as a vehicle for social justice. Passionate about educational equity and criminal justice reform, Eckhard interns for the Conviction Integrity Unit at the Philadelphia District Attorney’s office, where she supports efforts to combat wrongful convictions in Philadelphia. She has advocated for returning citizens as an intern for the Philadelphia Reentry Coalition. She is also a founding board member of The Liberation Foundation, a grassroots Philadelphia-based organization dedicated to overturning wrongful convictions and advocating for those serving disproportionate sentences. Eckhard plans to pursue a master’s degree in history, with a goal of returning to the U.S. to pursue a J.D./Ph.D. and a career as a law professor, advocate, and organizer for comprehensive justice reform.

Read the entire story at https://penntoday.upenn.edu/news/penn-five-2021-thouron-scholars