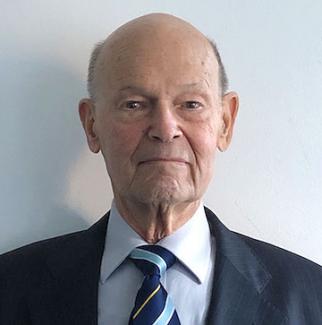 The history department is deeply saddened by Jonathan Steinberg’s death on March 4th.  Jonathan was an esteemed colleague, a revered teacher, and to many of us a cherished friend.

The history department is deeply saddened by Jonathan Steinberg’s death on March 4th.  Jonathan was an esteemed colleague, a revered teacher, and to many of us a cherished friend.  Jonathan was the Walter H. Annenberg professor in modern European history at Penn from 2000-2015.  By the time he moved to Philadelphia, he had already enjoyed a 35-year career at the University of Cambridge, where he had completed his PhD under F.H. Hinsley, who had helped to crack the ENIGMA machines at Bletchley Park.  Prior to starting his graduate studies at Cambridge in 1961, Jonathan worked briefly at the E.G. Warburg Bank in New York City and even earlier served briefly in the US military after completing his bachelor’s degree at Harvard.

Jonathan was an intellectual of great acuity, capacious range and boundless curiosity.  He believed in the power of facts and had many at his disposal; but he also had a penetrating analytical mind.  His erudition was deep and, in an era of specialists, simultaneously thorough and idiosyncratic.  He could startle with mention of the most arcane of works, but typically the surprise came from the illuminating relevance of the reference, not from its obscurity; and like a good chess player, he often seemed one or two moves ahead of his interlocutors.  Such traits might be overbearing in some people, but Jonathan was unfailingly kind and generous in his interactions with colleagues and students.

As Jonathan related at his retirement celebration in 2015, “When I first began my historical research, I gravitated to German history because the extermination of the Jews by the Nazis seemed to me then and still seems to me now the greatest challenge to historical thinking.” That interest led him first to study a crucial moment in the Wilhelmine period when an ascending Germany first flexed its muscle on the global stage.  A dissertation on pre-1914 German naval policy became his first book, Yesterday’s Deterrent: Tirpitz and the Birth of the German Battle Fleet (1965).  As to his next topic, anyone who recalls Orson Welles’ quip in The Third Man that the Borgias produced Michelangelo, Leonardo and the Renaissance while Switzerland gave us the cuckoo clock might have wondered.  Why Switzerland? (1975) justified the choice in spades.  Now in its third edition, the book is a classic account of one of the most anomalous countries of Europe.  In 1990, he finally turned his scholarship directly to the urgent question that had first led him into history.  All or Nothing: The Axis and the Holocaust 1941-1943 is a searing work that broke new ground not only in its comparison of German and Italian treatment of the Jews but in its account of occupied territories in wartime Europe.  Its exploration of the occupied Balkans, particularly Croatia, became something of an unintended primer for understanding the reemergence of ethnic violence in that region in the 1990s.  Jonathan’s interest in the fascist era converged with his expertise in financial and economic history in The Deutsche Bank and its Gold Transactions during the Second World War (1999).  Tracking the bank’s handling of gold plundered from central banks in occupied Europe and victims of concentration camps, the book was commissioned by none other than the Deutsche Bank itself.  In 2011, Jonathan published his crowning achievement, Bismarck: A Life.  Many of his colleagues at Penn had no idea he was working on Bismarck until this magisterial work appeared as if conjured out of thin air.   The book has been heralded as a definitive biography, even prompting an unexpected if somewhat curious review in the New York Times by Henry Kissinger.

From the moment he arrived at Penn, Jonathan devoted himself fully to his new institution.  He served as the History Department chair from 2001 to 2004, and he was always a committed and tireless citizen of the department.  He was a charismatic teacher, whose lectures on nineteenth and twentieth-century Europe drew many students, including a large following of senior associates.  He was a caring and dedicated teacher and mentor to many of our graduate students. Above all, he was a lustrous and enlivening presence in our community, bringing intellectual gravity and, occasionally, levity to our proceedings. We extend our deep condolences to Jonathan’s partner Marion Kant and his family, and to the many friends who are diminished by this loss.

The intellectual acuity evident in Jonathan Steinberg’s scholarship was matched by the generosity with which he mentored his undergraduate students. I first met Jonathan as a sophomore at the University of Pennsylvania, when I enrolled in his lecture course on the history of nineteenth-century Europe. Jonathan was a brilliant scholar. He was also one of the most popular professors at Penn. His graceful and sweeping lectures certainly sparked my decision to major in history, as no doubt was the case for many others. Much of this particular course centered on a comparative examination of the problems of state-building in nineteenth-century Europe. His focus on Italy and Germany was motivated by his enduring scholarly commitment to account for the rise of fascist and Nazi regimes in the 1920s and 1930s. While I did not realize it then, his engagement with these questions would leave an imprint on my own intellectual development, as I would go on to graduate school to pursue these themes in relation to Southern Europe and Latin America.

What made Jonathan such a popular professor among undergrads was his ability to make the past seem so relevant to the present. He made archival research exciting – even thrilling – as he shared with his students the stakes of historical inquiry. He walked us through, for example, the archival research that he had pulled together in the early 1990s to prepare his expert witness testimony for a trial for war crimes committed during World War II and shared with us his commissioned report on Deutsche Bank’s dealings in Nazi gold. Jonathan linked this probing into the past to present-day conversations over the possibilities for truth and reconciliation in the aftermath of war and genocide.

I came to know Jonathan as many students did—by dropping by his office in College Hall. I still recall my first visit. One assignment had asked us to read Giuseppe di Lampedusa’s novel The Leopard and relate it to the Risorgimento and Italian unification. After reading my essay, he wrote a note on the paper to applaud its originality and to invite me to attend his office hours to discuss further how the character Angelica personified the political and class tensions at work. Jonathan was always approachable, as he took time to get to know me, asking about my family and what had brought me to Penn. Over the next three years, he encouraged me to pursue various research opportunities and internships, taking keen interest in my post-graduation plans. He served as the advisor for my honors thesis, which introduced me to the joys of archival research. While my own research interests were geographically far removed from his, he consistently showed an eagerness to learn from me about Portugal and Brazil. It was also Jonathan who encouraged me to pursue graduate study at the University of Cambridge. As a fellow of Trinity Hall, he was eager to share with me his favorite Cambridge places and traditions. As a first-generation college student, having Jonathan as a mentor made all the difference, as he offered unwavering confidence in my scholarship and guidance on navigating academia.

As I find myself back at Penn, now as an assistant professor in the very same department where I once studied with Jonathan, I can grasp from an entirely new vantage point what made him such an extraordinary teacher. He inspired with his intellectual range and his endless suggestions of books for students eager to learn more. But he always did so in a warm and approachable manner. Conversations with Jonathan were never one-sided, as he was eager to listen to his students, to learn from their reflections on a particular book or subject. He leaves me with an exceptional model for the type of mentor and teacher that I aspire to be.

I, like so many others, feel very grateful to have known and worked with Jonathan. I extend my deepest condolences to his partner Marion Kant, his family, and his friends. May it offer some comfort to hear how positively he impacted the lives of his students.

Jonathan Steinberg believed in a whole life approach to education; he enjoyed cribbing George Bernard Shaw in opining that education is often wasted on the young. This brought him in conflict with the Arts & Sciences deans who felt that the Senior Associates Program had overgrown its original purpose in supplying his 100-level courses with over one hundred retirees who regularly audited his lectures. When this led to inevitable changes to the rules, he became a local celebrity, lecturing at the YMCA and then producing the Teaching Company tapes, “European History and European Lives 1715 to 1914,” which became a bestseller. Perhaps it is thus fitting that I was first introduced to Jonathan through the Penn Alumni/ae Program when I took the course “Italian History / Italian Film” that he offered with a colleague, Penny Marcus.

Jonathan believed that education begins with friendship. With me and many others he made an effort to understand his students and their investments in the subjects they were studying, and he readily shared his own experiences in the process. He helped me gain admission, initially as a part-time student, to the doctoral program at Penn, and cheered as I won Mellon fellowships and eventually a junior research (prize) fellowship in Cambridge.

Jonathan was exquisitely attuned to his interlocutors. He had an almost preternatural sense for “where students were” and could meet them more than half-way. With undergraduates and graduate students alike, he could grasp almost instinctively how the student understood a subject or a problem, and could direct us to further readings or draw our attention to areas that required further thought. He also wrote beautifully. Following Wittgenstein, he maintained that “thought occurs in language”: you could not understand history until you tried to write about it.

Jonathan believed that history has a moral purpose independent of memorialisation. He spent a lot of effort reading Habermas, Gadamer, Ricœur, among others, with graduate students at Penn to try to decide for himself how he felt about the philosophical underpinnings of the Linguistic Turn. We never came to any definitive answers, but that mattered little. The questions Jonathan raised and the seriousness with which he pursued them have stayed with me for over a decade, even as I have moved away from history into economic geography, economic analysis, and infrastructure economics.