Iran protests, explained. Historian Firoozeh Kashani-Sabet, an expert on modern Iran and gender in the School of Arts & Sciences, discusses what sparked the protests and why they’re important. (Kristen De Groot) 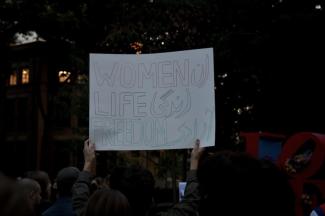 Why did this killing inspire such intense protests?

People have a lot of pent-up frustration with the regime, and it took a violent and unjust killing such as the murder of Mahsa Amini to ignite a massive protest movement. Actually, the history of modern Iran is replete with comparable protest movements that began with a local event that gained traction and became a catalyst for political change. Iranian women have stood at the forefront of politics throughout the country’s modern history. People forget that even in the oil crisis of 1951 to 1953, for example, women’s suffrage was among the demands of the protestors.

Iranians, in particular the youth, have been frustrated with all manner of things. The pandemic has intensified the economic pressures on Iran, which already were monumental. Hardworking women and men feel the impact of the sanctions in a way that elites never do. Today’s protests represent a movement about freedom. This is a movement about women’s rights, but also about resistance to violence against women and resistance to political repression. At a time when we see a retrenchment of women’s liberties all over the world, Iranian women have taken the lead in the fight for political freedom. The protests in memory of Mahsa Amini and all the other demonstrators who have sacrificed their lives serve as a powerful call to action, especially because women themselves are now the agents of change.

What are the other grievances driving these protests?

First and foremost, people long for political freedom, which supersedes every other demand. In addition, Iran has become increasingly isolated and marginalized regionally and internationally. This isolation has placed a lot of pressure on people. Iranians are not welcome in many countries, which speaks to the unpopularity of the country’s current politics in international circles.

However, this was not always the case. It bears remembering, for example, that during the interwar period, Iran was actually one of the few countries outside the Western world that had membership in the League of Nations. It was not long ago that Iran was a leader in what later became a Third World. Now, the Islamic Republic is often described a pariah state. This is among people’s other grievances.

How unusual is it for women to be at the forefront of a protest like this in Iran?

For Iran, it is not that unusual. During the country’s constitutional revolution, from 1906 to 1911, women clamored for change and supported the creation of Iran’s parliament. When the 1979 revolution unfolded, women participated fervidly in the protests. At the same time, however, women become a barometer of politics. The Islamic Republic often targeted women to assert its power. For example, after 1979, reproductive rights were regulated in ways that proved less liberal for women. Mandatory veiling was imposed, and, of course, some people will say, ‘Well, there was also mandatory unveiling in 1936.’ But the mandatory unveiling decree was very short-lived, only a handful of years, whereas we now have more than 40 years of women not having the choice.

The Islamic Revolution of 1979 declared a culture war (kulturkampf) that unabashedly targeted women. This is why it is remarkable that Iranian women put their lives in jeopardy, particularly young women, but we see some older women, too, in these powerful protests, to demand freedom and justice. They can be imprisoned, they can be murdered, they can be physically abused, they can be subjected to surveillance, and their families as well. There’s a whole host of things that can happen to activists in general, but especially activist women in Iran. It’s a tremendous risk.

Where do you see things going from here? Do you have a sense of how it will end?

This is a moment of reckoning, a moment for the country and the world to say, ‘We are behind the good fight.’ It’s a fight not just against one unnecessary murder, but many. It is a fight not only for women to have a choice in what they wear, how they speak, and what they do. Rather, it’s a call for freedom and enfranchisement, a movement that will allow people to reclaim the political process and define the future of their country. There is a lot at stake. The level of intensity in the protests is therefore entirely warranted. The unflappable resolve and determination of Iranians in these demonstrations have not been replicated in other iterations of political dissent since 1979.

Why is that? Why is it particularly intense now?

I believe we are witnessing a unity of cause—internationally and domestically—that did not exist in previous protest movements against the Islamic Republic. People of different ages and generations, people of different classes and backgrounds, are protesting together in one voice and in a brave and unwavering show of defiance. The outrage over the death of Mahsa Amini and others gets at the root of violence toward women everywhere, and this powerful message is one that cannot be easily dismantled. On the contrary, any attempt at silencing it will only result in further dissent.

What is most important for Americans to understand about what’s happening?

Americans need to understand that many Iranians are fed up with the failures of their government. A pervasive sense of anger and exasperation has compelled the youth in particular to fight for a better future. Right now, Americans need to abandon the notion that Iran and America will forever be at loggerheads. Instead, it is crucial for the United States to try and embrace a movement that is grassroots in nature and represents the good fight.

America should not be cautious about standing with Iranian protestors, especially women. This is the people’s fight: a battle for justice, freedom, and women’s rights. It is a fight for giving people the freedom of choice. It is a fight against oppression and a fight for the future of a nation and its people. The American public needs to rally behind this cause and take a stance against injustice.