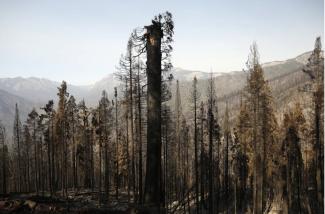 In downtown L.A., in the parking lot of the Automobile Club of Southern California, sits a quaint monument, one century old. It’s a cross section of a giant sequoia, propped on its side, with arrows pointing to tree rings marking era-defining events. Meanwhile, in the Sierra Nevada, thousands of crown-scorched sequoias stand dead as de facto monuments of climate change. With both kinds of de-immortalized Big Trees, Californians can see connections between civilizational time and the temporal condition called the Anthropocene.

The AAA timeline at West Adams Boulevard and Figueroa Street was one of many derived from a single fallen tree in Sequoia National Park. Starting in 1923, the park’s superintendent freely supplied slabs to educational institutions, as long as recipients paid shipping. With each 1.5-ton piece, the National Park Service sent interpretive instructions, including a list of historical events — though no guidance on finding the correct corresponding rings.

By handpicking pivotal moments, curators revealed prejudices. The most variable tag was the penultimate one, for which they turned to whatever appeared to be the latest world historical happening before the felling of this particular mammoth tree — “World War begun” or “Automobile Club founded.”

The earlier tags repeated themselves. I know because I obsessively tracked down 25 cross sections — mostly giant sequoias, plus a few coast redwoods — installed throughout the country in the first half of the 20th century. The following events appeared with greatest frequency:

• Discovery of America by Columbus (21)

These timelines — artifacts of white supremacy — condensed a civilizational narrative: A divinely ordained course of empire moves westward from the Old World to the New, from Christian Rome to Reformation England to the twice-born U.S. republic, with its empire of liberty serving as the endpoint of progress, the final stage in historical time.

In this wooden enforcement of collective memory, famous men carry the banner of advancement. The prominence of Vikings reflected the eugenical valorization of the “Nordic race,” as well as the efforts of Scandinavian immigrants to claim American heritage. Muhammad’s salience is also explicable. WASPy curators would have preferred a marker at AD 0 — “Jesus Christ born” — and, indeed, some went ahead and added the Nativity. Honest ones knew that sequoia slabs available to museums were not quite old enough to be coeval with Christ, and they accepted the prophet (tagged at AD 570) as an Abrahamic placeholder.

These timelines ignored California’s precolonial past. The supposed Point Reyes landing of Sir Francis Drake occasionally merited mention, as did the founding of Spanish missions, but the Golden State before conquest was literally timeless. The privileging of fixed points in linear time nearly guaranteed the erasure of Native histories, irreducible to dated or datable events. The only Indigenous peoples who sometimes got matched to tree rings were Mayas and Aztecs, calendrical peoples who comported with Western ideas of civilization.

The generation of land managers who pinned these tags to sequoia slabs also instituted, with corresponding certitude and racism, the policy of fire suppression in the Sierra Nevada. They attributed a dearth of young sequoias — a fire-adapted species with flame-released cones — to the “savage” pyromania of California Indians. They mocked “Piute forestry.” Suppression became such a shibboleth that Congress in 1922 forbade the use of Sequoia National Park’s firefighting funds for “precautionary fires,” later known as prescribed or controlled burning.