Dulcinea in the Factory: Myths, Morals, Men, and Women in Colombia’s Industrial Experiment, 1905–1960 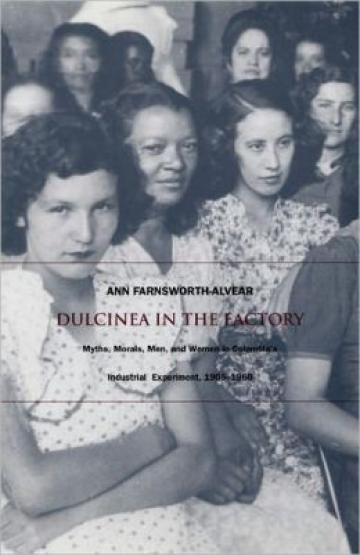 Before it became the center of Latin American drug trafficking, the Colombian city of Medellín was famous as a success story of industrialization, a place where protectionist tariffs had created a “capitalist paradise.” By the 1960s, the city’s textile industrialists were presenting themselves as the architects of a social stability that rested on Catholic piety and strict sexual norms. Dulcinea in the Factory explores the boundaries of this paternalistic order by investigating workers’ strategies of conformity and resistance and by tracing the disciplinary practices of managers during the period from the turn of the century to a massive reorganization of the mills in the late 1950s.

Ann Farnsworth-Alvear’s analyses of archived personnel records, internal factory correspondence, printed regulations, and company magazines are combined with illuminating interviews with retired workers to allow a detailed reconstruction of the world behind the mill gate. In a place where the distinction between virgins and nonvirgins organized the labor market for women, the distance between chaste and unchaste behavior underlay a moral code that shaped working women’s self-perceptions. Farnsworth-Alvear challenges the reader to understand gender not as an opposition between female and male but rather as a normative field, marked by “proper” and “improper” ways of being female or male. Disputing the idea that the shift in the mills’ workforce over several decades from mainly women to almost exclusively men was based solely on economic factors, the author shows how gender and class, as social practices, converged to shape industrial development itself.

Innovative in its creative employment of subtle and complex material, Dulcinea in the Factory addresses long-standing debates within labor history about proletarianization and work culture. This book’s focus on Colombia will make it valuable to Latin Americanists, but it will also appeal to a wide readership beyond Latin American and labor studies, including historians and sociologists, as well as students of women’s studies, social movements, and anthropology.