The Glitter of Gold: France, Bimetallism and the Emergence of the International Gold Standard, 1848-1873. 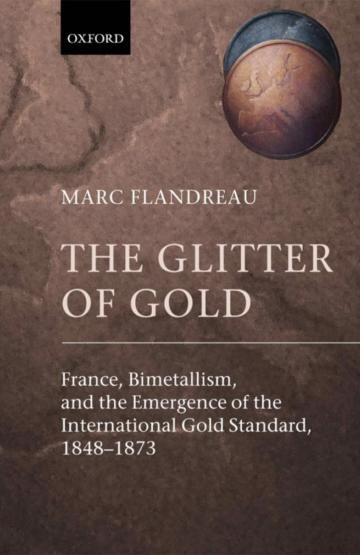 This book studies the so far unexplored operation of the international monetary system that prevailed before the emergence of the international gold standard in 1873. Conventional wisdom has it that the emergence of gold as a global anchor was both an inescapable and desirable evolution, given the exchange rate stability it provided and Britain's economic predominance.

This study draws on a wealth of archival sources and abundant new statistical evidence (fully detailed in the appendix) to demonstrate that global exchange rate stability always prevailed before the making of the gold standard. This was despite the heterogeneity among national monetary regimes,
based on gold, silver, or both.

The reason for the stability before the establishment of the gold standard is France's bimetallic system. France, by being in a position to trade gold for silver, and vice versa, effectively pegged the exchange rate between gold and silver at its legal ratio of 15.5. Part I of the book studies exactly how this mechanism worked. Part II focuses on the respective behaviour of private concerns and arbitrageurs on the one hand, and authorities such as the Bank of France on the other hand, in order to underline the constraints and opportunities that were associated with bimetallism as an international regime. Finally, Part III provides a new view on the collapse of bimetallism and its replacement by a gold standard. It is argued that bimetallism might well have survived, and that the emergence of the gold standard was by no means inescapable. Rather, it resulted from a massive coordination failure at both national and international levels - a failure that was a preview of the interwar collapse of the gold standard.